We’re all reactionary. This is the political equivalent of Dostoyevsky’s Christian maxim, “we’re all guilty”. No one can be in total solidarity with all of humanity, and those who pretend to are usually either irritating hippie-types, or real creeps, like cult leaders, fanatical militant egalitarians, or abusive parents.

Much of the appeal of right-wing ideology — and I mean both libertarianism and traditional conservatism — is in its perceived brutal honesty and realism. Its adherents recognize the above “original sin”: when push comes to shove, most of humanity will put their own before others. But whereas a right-winger celebrates being a self-centered primate, an honest left-winger seeks to minimize all forms of political assholery, both internal and external, domestic and international, knowing full well that such a project will never be finished. Biblically speaking, Moses will never reach the Promised Land. Or to quote Corey Robin, paraphrasing Freud, socialism is “converting hysterical misery into ordinary unhappiness.”

There are also those who claim that the left-right dichotomy doesn’t apply to them. That’s like saying you’re above the whole brushing-your-teeth vs. not-brushing-them divide, because you don’t have a fixed position on, nor much interest in, the issue of dental hygiene. And because you just, like, totally hate both camps, man.

And then we have the Third Way folks, with roots in the modern Democratic Party and Tony Blair’s New Labour. These charming people position themselves firmly in the “center”. In their rhetoric, they have a parasitic relationship with the Left, although with a comically hysterical emphasis (at least in the US) on identity politics. In de facto policy, they have a symbiotic relationship with the Right. It’s obvious that Hillary Clinton and her coterie of loyal lackeys just love to play the Good Cop to Trump’s Bad Cop. That’s pretty much all they’ve got.

There’s a bit in Hillary’s memoir about her inner circle, lovingly called “Hillaryland” ever since her time as First Lady. An all-female posse with one token gay man, it was “our own little subculture within the White house… My staff prided themselves on discretion, loyalty and extraordinary camaraderie”. The West Wing had a tendency to leak, but “Hillaryland never did”. This might help to explain why the Clinton campaign has tanked so badly. From the tone-deaf attempt to portray Hillary as a carbon copy of your Mexican grandmother, to the tone-deaf plan to attack Donald Trump for not being rich enough, the campaign’s incompetence has been staggering.

Those who feel Trump is more dangerous than the candidate of the Extreme Center are justifiably worried about the current polling. Even the universally loathed Goldwater Girl should be way ahead of the Smirking Orc the GOP has nominated. Alas, she isn’t. But when you value blind loyalty — tribalism — over competence, the tactical abilities of your advisory team will probably be left wanting.

Not all people self-identify with their default tribal groups — of those who share their nationality, language, or ethnicity. This is more common in societies where there’s a prevailing sense of security. But whenever the livelihood and well-being of one’s immediate family depends directly on one’s tribal affiliations, the liberal Kumbaya-pose tends to quickly lose its charm. In fact, this is exactly what’s happening in Europe right now — even though there is no actual danger, just hysteria — as Turkey, employed by the EU states as a gate keeper, is shooting Syrian refugees with live ammo.

But if every left-winger is a reactionary of sorts, every right-winger is also a socialist of sorts.

The Chicago Boys wreaked havoc in Chile during Pinochet’s reign, but the copper mines, Chile’s primary source of wealth, were never privatized — by mutual agreement between the dictator and his neoliberal American advisors. No one even floated the idea. The junta’s footmen, employed to quash all forms of dissent by means of terror, murder, and torture, collected their paychecks from a government whose main revenue came from a socialized industry. Such was the “Miracle of Chile” touted by noted Stalinist Milton Friedman.

Had it not been for North Sea oil, Thatcher’s reign would probably have ended in a complete collapse within a year or two. It was public revenue, flowing in from the coast of Scotland, that bankrolled her failed experiments. No wonder that Thatcher felt such affection and comradeship towards Pinochet, a fellow piglet sucking on the government teat.

During the 2008 banking crisis, every market-fundamentalist TV pundit suddenly supported the bailout. In a heated exchange, the senator from Vermont, Bernie Sanders, accused the TV presenter Larry Kudlow, a typical private-schooled, Princeton-educated let-them-eat-cake asshole, of being a socialist:

Kudlow: Senator Sanders, I gotta believe preventing a meltdown will help main street, will also help the tax payers. But that’s just my view, what is your view?

Sanders: Well, Larry, I’m sure that after all the ranting and raving that you have done against government intervention, and the virtues of the free market, I know without saying that you are opposed to the bailout.

Kudlow: No, I’m in favor of the bailout!

Notice Kudlow’s first words: “I have to believe.”

All forms of ideology are based on a narrative. A narrative doesn’t have to make sense — being self-contradictory can make it all the stronger, as every self-respecting cult leader knows. The only purpose of an ideological narrative is to serve a tribal function. Kudlow, in his exchange with Sanders, is propelled by a tribal instinct. He’s even brandishing an invisible fetish called Credit. This mysterious entity can generate actual wealth out of thin air. Bow down and you’ll be granted a share of its magical powers. (And please disregard the earthquake that just hit us in the midst of this same ritual.) Through the bailout, Kudlow claims, the middle class will make money.

On the heels of the 2008 banking crisis, the high priests of market fundamentalism began to publicly question their own dogmas. Some Wall Street executives even bought a copy of Das Kapital. Was it sincere soul-searching or mere damage control? Or perhaps these people of Kudlow’s ilk are more akin to plantlike organisms that just automatically respond to shifts in the climate? “After royally fucking the serfs in the ass for some centuries now, we’ve come to doubt whether feudalism actually is the optimal system for fostering agricultural innovation.”

Soon after the financial meltdown, Alan Greenspan, the former Fed chair and the foremost enabler of the crash, lamented in his testimony before Congress that the reckless behavior of the banks had taken him by surprise. He admitted to having “found a flaw” in his thinking. The markets, would you believe it, did not and could not regulate themselves! This was no small concession from an ardent follower and insider of Ayn Rand’s cult, nicknamed “The Undertaker” by Rand herself. (You can’t make this shit up!) 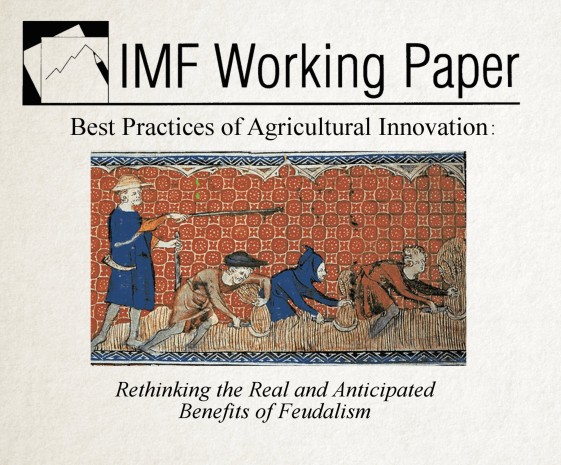 But merely admitting to flaws in your thinking is so last decade. Fast-forward to 2016, and it seems there’s a Marxist revolt brewing in the very heart of iconic neoliberal institutions. Last Friday, The Guardian published a story on a recent report by IMF economists. Its conclusion: austerity policies do more harm than good. As David Graeber, author of Debt: The First 5000 Years, put it:

in case you haven't heard, IMF has just announced, "all that austerity stuff? on second thought: never mind." theguardian.com/business/2016/…

in a press release, the IMF added, "& btw, sorry about destroying the hopes & dreams of generations of poor youth. Nobody's perfect."

One begins to wonder if there isn’t another cataclysm on the horizon, even greater than the French Revolution. According to de Tocqueville, “the most dangerous moment for a bad government is when it begins to reform.” Are the number-crunchers onto something? Why are they suddenly behaving so erratically? Are they our canaries in a coal mine?

And what should we make of this Bloomberg article from February? Goldman Sachs Says It May Be Forced to Fundamentally Question How Capitalism Is Working. Analysts at the multinational investment bank are baffled by the fact that, instead of oscillating, corporate profit margins have stubbornly remained elevated. This despite weak demand and general industrial overcapacity. In theory, high profit margins should encourage competition, leading to decreased profits — something that doesn’t seem to happen in our oligopoly-driven system.

If this sounds a wee bit too technical, the conclusion of the report spells it out in simple terms: should profit margins remain high for the next few years, that casts doubt on “the efficacy of capitalism”.

“Mainstream economists, unite! You have nothing to lose but the bullshit you’ve been forced to spew!”