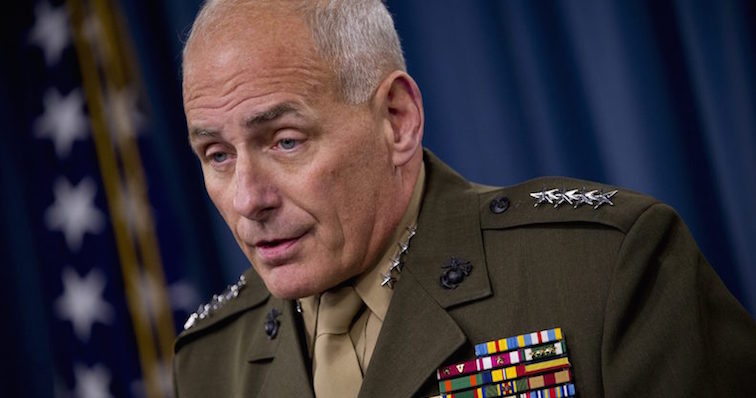 [This article was originally published on Progressive Army.]

White House Chief of Staff John Kelly was in a particularly earnest mood in an interview on Fox News yesterday when he gave his historical analysis of the Civil War. It was due to a “lack of ability to compromise,” between “men and women of good faith on both sides,” including the Confederate General Robert E. Lee, “an honorable man”. And it is inconceivable, according to General Kelly, that we should apply our moral notions on people who lived in such different times “and say, ‘What Christopher Columbus did was wrong.'”

It was no slip of the tongue, either, when Sheriff Steve Prator lamented a set of newly passed laws addressing mass incarceration in his home state earlier this month. As the elected law enforcement head of a parish in Louisiana — a state with a well-earned reputation as the planet’s incarceration central — he protested the release of certain non-violent prisoners: the “good ones”, those “we use every day to wash cars, to change oil in our cars, to cook in the kitchen, to do all that, where we save money.” With a number of black officers behind him, as well as centuries of slavery in different forms, he went on at length: “That’s the ones that you can work. That’s the ones that can pick up trash, the work release programs. But guess what? Those are the ones that they’re releasing!”

It’s always fascinating when a public official commits a Kinsley gaffe, and the veil drops for a brief moment. It is no secret that the en-masse incarceration of mostly black and brown people in America is a huge business and a direct continuum of slavery. But probably better not to say it out loud — especially in Louisiana, where sheriffs play a particularly bizarre role, not only supplying much of the unpaid work force but constituting a majority of the state’s prison entrepreneurs. Likewise, a bit too candid for an NFL owner to say of his players protesting police brutality against blacks: “We can’t have the inmates running the prison.” (What, not even the good ones?) This was blurted out last month by Houston Texans owner Robert McNair — sounding like an owner, indeed.

It can be hard to keep quiet when those around you reinforce the notion that you ought to be proud of your work, even as you are expected to cloak it in doublespeak. Take voter ID laws: since the 2012 presidential campaign, it’s almost as if every Republican official has been itching to take credit for their effort to prevent minorities and the poor from voting, starting with Pennsylvania House Republican Leader Mike Turzai who bragged: “Voter ID, which is gonna allow Governor Romney to win the state of Pennsylvania: done!”

Despite the backlash, this wasn’t even a one-off. A number of other GOP officials came out with similar, bizarrely honest remarks — including the GOP consultant Scott Tranter, who mused about his party’s “toolkit”: voter ID and long lines at polling stations — eventually prompting a Washington Post article titled Republicans keep admitting that voter ID helps them win, for some reason. As the cherry on top, a GOP precinct chair named Don Yelton, a minor party activist interviewed by The Daily Show in 2013, said of voter ID: “If it hurts a bunch of lazy blacks that want the government to give them everything, so be it!”

Donald Trump, too, periodically utters truths that are not supposed to be uttered, as happened again just a couple weeks ago with regard to the shipping industry’s interests in Puerto Rico. But anything at all can come out of his mouth, and does: from drivel, to conspiracy theories, to left-wing critique of American foreign policy, to more drivel. (And anyway, let’s not talk about Trump.)

He’s quite different from another gaffe-prone leader under whose government I’ve lived. I’m currently based in Hong Kong, and arrived here three years back at a historic moment, just days before the pro-democracy Umbrella Revolution kicked off. Throughout the most tumultuous phase, Hong Kong’s then-leader kept his feet firmly planted in his mouth. CY Leung, the widely-despised chief executive (up until last June), turned into a veritable gaffe machine, high on truth serum. My favorite moment was at the onset of the Year of the Sheep when, in his prepared message for the Lunar New Year’s celebration, he advised Hongkongers to “be more like sheep”.

This was an even more ill-advised choice of words than you might think, as Leung was called “the wolf” by his detractors, one of many puns on his name. As tonal languages, both Cantonese and Mandarin are great for word play, which often figures into political sloganeering and mockery. (For the same reason, the mainland banned puns a few years back, citing “cultural and linguistic chaos”.)

Thanks to Leung’s nickname, a toy animal sold by Ikea became a mascot of the Umbrella Movement after someone hurled “Lufsig” the wolf at him during a town hall meeting in 2013. The adorable critter — fond of “mischief” according to Ikea’s website — became a sensation and soon sold out. As it turns out, Lufsig’s name was innocent enough in Mandarin, but the same Chinese characters read in Cantonese can be made to sound quite crude. The Swedes were no doubt horrified to find that the local name of their “lumbering one” (as the original roughly translates) could mean “your mother’s pussy” in Cantonese. Worse still, “throw a Lufsig at you” can be translated as “fuck your mother’s pussy”.